Congratulations to Greg for winning February's Lude Of The Month, with his face-lift BA4 >>> Click Here For Profile <<< 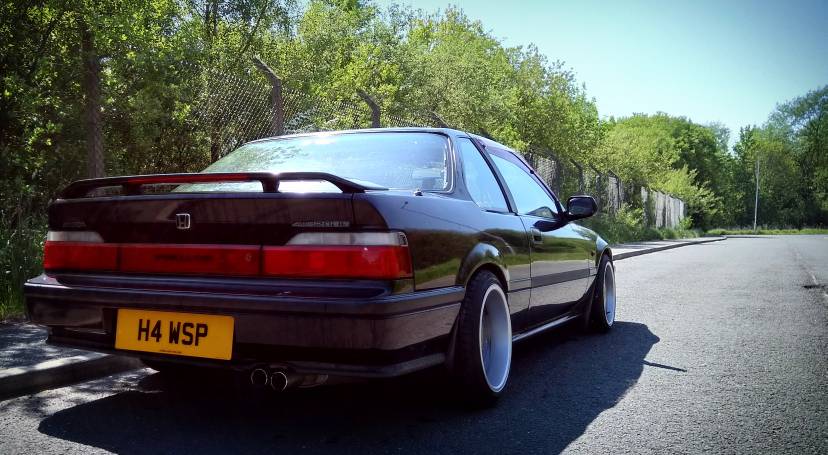 The front left ABS wheel speed sensor on my 1990 2.0i 16V 4WS has failed.
It's open circuit from (I think) having touched the sensor ring due to the aluminium housing corroding/bulging.

I can't find a replacement here in the UK. I found, ordered and paid for one from Japan, only to get an email [and refund] saying the part was discontinued. Same happened with a parts distributor in the U.S.

I've tried car dismantlers here and abroad, and am drawing a blank. Found one at a breakers in Stranraer, this week but when I phoned they said it went for crushing last week

As you all know, having the ABS light on means an MOT failure, and the car becoming, ultimately, junk.

I'm desperate to avoid this as I have lavished much time and money on the restoration.

Does anybody know if there is a sensor from another Honda model [or even a different make] that has the same specifications and would fit on the hub with the required clearance rom the sensor ring? I can splice the wire on to the existing lead & plug as it's only two cores, but what is important is the sensor end. Think we can clean up and and adapt the housing if necessary.

Or alternatively, does anyone know of anywhere that might be able to repair the existing unit? As it's open circuit, I presume the windings are damaged.
Top

Have you got a picture of the sensor as it stands? or one from the other side?

Trouble is with a lot of online parts , generic images are used...

I suspect the sensor itself is the same as many hondas from that era, find a few cheap ones on ebay and have a look - I've got some spare 5th gen rear ones. I guess the only thing that is really important is the diameter. Its offset and how its positioned in the sensor i guess is to some extent adjustable/bodgeable.
'00 UKDM 2.2VTI H22a8
'97 UKDM 2.2VTi (Gone)
Top

I'll get a picture of the existing sensor when we remove it next Thursday. I'll post it then with some measurements to see if the diameter might match - guess it's the same technology until early 2000s...
Top

I'll get a picture of the existing sensor when we remove it next Thursday. I'll post it then with some measurements to see if the diameter might match - guess it's the same technology until early 2000s...

You need to check the resistance of the sensor, see what the ECU is expecting compared to what the sensor is sending out. I had the same issue, albeit 4g and on the rear, but if you can adapt the housing to accept a new sensor (with the same resistance band) then there'd be no reason why it wouldn't work. Indeed, I did just that, but in the end I found out my problem wasn't that I'd bought faulty second hand sensors it was that the gap between sensor and castelation ring was too great; cleaned the hub, sensor worked perfectly. That particularly "finding" took 6 months to sort, having tried everything you can possibly imagine, so don't assume your current sensor is junk. Open circuit can mean a break in the cable between sensor to plug, from plug to the ECU, so definitely investigate that too.

Stupid question, but, have you tried Honda yet? I've bought parts for my 4g/5g that you'd think would no longer be available but Honda had them on next-day!
4g 2.2 in Silver, 5g 2.2 Motegi in Blue.
Top

This is really useful.
Yes my first port of call was Honda - first in the UK. The part was listed by dealers in Japan and the USA but after I ordered I received emails saying it was discontinued.
We stripped some insulation to check the wires on the existing sensor as close to the head as possible, and it was still open circuit, so the break is somewhere inside the sealed unit.
I've managed to find a used sensor off a 4th gen which will arrive next week, which looks very similar [same mounting hole spacing] but I guess we'll need to shim it out to get the same gap from the ring. We'll measure the resistance of the new unit in comparison with one of the other, working ones, but I guess we'll need to account for cable length too?
Thanks again for taking the time - I'll report back.
Meanwhile, I have some pics of the one we took off. Just need to work out how to upload them...
Top

The cable length should be fine, the only issue may be the resistance expected by the ECU; it's definitely different from 4g to 5g, that much I do know, but I can't comment on 3g to 4g. Have a look in the manual, there's a link on this site to them (which is how I know there's a difference

Thanks - that is really useful to know. Whereabouts in the manual(s) would I find the expected resistance(s)?
Top

Thanks - that is really useful to know. Whereabouts in the manual(s) would I find the expected resistance(s)?

New to the Forum, but having the same problem (only Front RHS sensor). In the online manual, you'll find the information needed under Brakes -> ALB -> ALB Checker -> Flowchart.
I've currently found a breaker and I'm hoping to get the parts (if working) off of it. Did the 4th gen sensor work on yours? I keep finding ones for 88-90 Civics which look exactly the same (even the add states 'actual item' on the photo) but I'm not sure if they're active or passive sensors. I'm pretty sure the 3rd gen Prelude uses passive ABS sensors as the error kicks in after going over 10mph.
Top

The 4th Gen and Civic ones didn't fit. Was going to try adapting one but found a 3rd Gen one in the U.S., which worked.
[sod's law now means the ABS regulator has now developed a fault